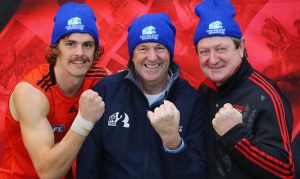 it again! Neale has managed to raise another $5.6 million to fight The Beast that is Motor Neurone Disease (MND).

After having a much-deserved rest over Christmas, Neale has been busy lobbying government to put more dollars into research to find a cure for MND.

He also planned another massive ‘Big Freeze at the G’ and the Federal Government agreed to match his Big Freeze fundraising dollar for dollar.

On top of this, Neale has been named as a Member of the Order of Australia in the Queen’s Birthday honours list. But that’s not what it’s all about for him; it’s about finding a cure for this awful disease.

Doing the walk with Neale on Monday June 13 and seeing the way that he, Ian Davis, and Pat and Ange Cunningham have inspired people to join the fight is just outstanding.  I’m so proud of the way Neale has brought so many people together; all of them with stories to share and all united to beat this beast.

I can tell you that Neale is more and more hopeful that a cure for The Beast will be found with this money and, of course, the support of some very talented scientists. In the meantime, we are spending as much time with Neale as we can and looking forward to another hilarious trek through Victoria on the 2016 Danihers Drive.

Earlier in the year 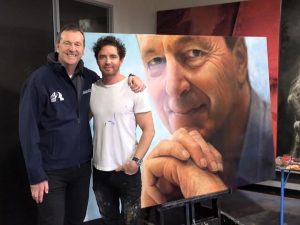 , Neale was approached to sit for a portrait by prominent Melbourne artist Vincent Fantauzzo. The plan is to enter it in this year’s Archibald Prize and I’m sure you’ll all agree that the way he has captured Neale is just uncanny. Neale is thrilled with the way it captures his positive outlook and focus.

To help Neale crack the $6 million mark for 2016, donate now at freezemnd.com